There is never a shortage of characters up here in the Strait, nor is the a sparsity of tall stories. However some of the true ones seem the most fanciful.
Seaman Dan, or ‘Uncle Seaman Dan’ is the stuff of living legend, his trademark expression is “Steady, steady,” followed by a ‘whoopee’ sound of glee, a smile and a wink.
In his mid eighties, he still has a spark and zest for life that is enviable.
Catching the ferry back to Horn Island last year, I sat next to Uncle Dan and had a yarn. He squeezed my knee, winked and said, “Arhhh, it’s a beautiful day to be alive, whoopee.”

Born on TI in 1929, His grandfather was a boat captain from Jamaica and his great grand mother a chief’s daughter from New Caledonia.

By 11 he told me he was on horseback mustering cattle in Far North Queensland, then as a young man he worked on the pearl luggers as both a diver and a captain. I asked if he ever met Mr Crocodile.

“Oooh, sometimes working around the mouth of the Jardine River, it was very cloudy, the water so dirty you couldn’t see your hand in front of your face. I never saw a crocodile, but it was pretty scary. But if you didn’t come up with a bagful of pearl the skipper would just send you down again,” he said chuckling. 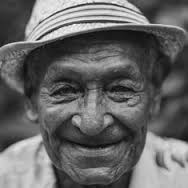 Oh did I mention, he’s also a two time Aria winning musician, with five albums under his belt, who last year received a Hall of Fame Award at the National Indigenous Music Awards? He didn’t start his music career until he was 69.

His fusion style blends Polynesian, Melanesian, with Nat King Cole and a dash of Sinatra, and TI ‘Hula’ tunes. He is a bonafide charismatic croner that has toured the country from Australia’s most northerly pub, to Tassie’s Ten Days on the Island, and everywhere in between.

Welcome to the Torres Strait

Until a recent health scare, he played two gigs a week in the Torres Strait, now recuperating, he still strums his guitar at home enjoying his ‘semi’ retirement.

His grandson Patrick Mau is now carrying the gauntlet, carving a name for himself as an emerging Hip Hop artist, who after doing several underground mix tapes, has just completed his first studio recorded album, the aptly titled, “The Show Must Go on,” which he has just toured nationally.

Here’s the single off the album

As we berthed at Horn Island, Uncle Seaman Dan hobbled off on his zimmer frame, but not before he showed me his favourite fishing spot. He then he disappeared into the afternoon haze heartily humming a tune.