Editing a newspaper (that’s not owned by Murdoch), I never thought I would need to be censored, but in a strange way it happens often up here in the Torres Strait.

Now the media cherry-picking quotes to suit a particular end is common knowledge. Most people have a certain disdain for media hacks who subvert the truth to suit the flavour of the day.

Take this interview Dire Straits our ‘Aunty’, ABC, did with me just before the Federal election in 2013, when all the hyperbole was around “stopping the boats” in order to win the votes of a xenophobic, bogan sub-class in marginal seats of Westie Sydney. It’s about an expected flow of asylum seekers coming to Australia via PNG.

Although Auntie gave a reasonable review of the situation, some of my comments were ‘not included’, in particular where I mentioned that the numbers of asylum seekers that year were no worse than last year, and that number being less than a dozen, it hardly constituted a big problem. But it didn’t suit the sensationalist angle they were pursuing.

There are other forms of censorship up here though. For one , it’s company policy not to mention the names of people involved in criminal activity, if they live here. Why? Well personal safety of me the editor, my boss warns me. With family and the family name of such significance here, the public shaming (and the fact we all live on a small island), may have nasty outcomes. (I do have a Louisville Slugger by the front door – company issued!). 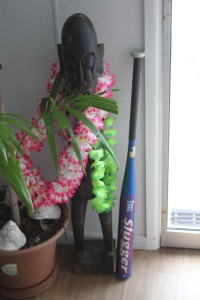 When prominent Torres Strait artist Dennis Nona was charged with raping an underage girl, a story splashed across National media, my story was pulled by my boss. I was muzzled only for my own protection.

One of the weirder forms of media muzzling I have not succumbed to up here is stories about the many stray dogs that cause havoc in the community. I wrote an article about how a 14 yr old fox terrier was torn apart by a neighbor’s dog, and although i did not mention the neighbor’s name, I sure felt the heat from the community. People (mainly middle age white women), would confront me hostilely about how I had divided the community and that the little terrier deserved the mauling.

As an Islander mate explained to me, there are layers of bitter bickering and politics on the island, but on the surface everyone is nice to each other because we all go to the same social gatherings and bump into each other at the only supermarket, bank and post office daily.

It make my job tougher than getting blood out of a stone at times.

Even the disenchanted youth can not express themselves like their more urbane counterparts, tagging toilet walls with graffiti is rarely anonymous. A recent youth AKA Squid, lasted only a couple of weeks before he was brought undone and busted.

It’s part of maintaining that polite exterior under which lies the seething anger off isolation, racial vilification, domestic violence and the ‘gap’ between indigenous and non-indigenous, not to mention family feuds that may date back generations. But overall ‘Ailan’ folk are a happy, yet conservative bunch. 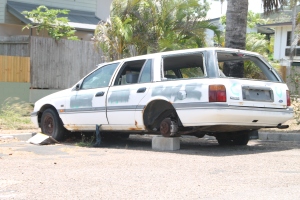 On Goods island which is uninhabited since the second world war, where a scattering of deserted bunkers and artillery batteries are all that remains, I discovered this ‘tag’.

But when it’s something important to Islanders, the information flows. The QLD government, on its continued campaign of penny pinching decided to not publish the annual Tide Times Book, something regarded as a bible for Islanders. As the minister’s office said to me, “it is available fro free online to be printed or downloaded to your phone.”

However not everybody has access to the internet or a printer and there are black spots in mobile phone coverage, not great when the sea if their only form of transport. However, a couple of weeks of front page stories have seen the government break under community pressure and they are now preparing hard copies to be gived out to those who need – too bad if all 6,500 Torres Strait Islander decide to ask for a couple, could mean the government bean counters banked on a false economy not offering the book people previously happily paid for.

One happy reader even dropped me off a gift for my efforts a bottle of ‘Muralag Moonshine’ a homebrew of coconut milk, brandy and rum. The bottle has a quote by Oliver Goldsmith: “Let schoolmasters puzzle their brain with grammar, and nonsense, and learning. Good liquor I stoutly maintain, gives genius a better discerning.”

Attached was a note that read: “may your automatic bilge pump or self-draining floor do you justice in the weather.” (its the wet season up here). I guess that’s a compliment…

The Islanders have really got their priorities Strait up here. Some times the regional Councillors go missing for days, weeks sometimes. They may just drop everything to fishing, even though it’s annoying for me trying to get that quote I need, the ever grinding quest for the front page pic and the front page story, I can’t blame them. In the greater scheme of things, they may have their priorities right.

Let me illustrate island priorities with an anecdote.

I recently attended the 40th anniversary  lunch of the Aboriginal Hostel Association, and organisation that provides temporary shelter to transients, homeless, or people travelling fro remote communities on the outer islands. 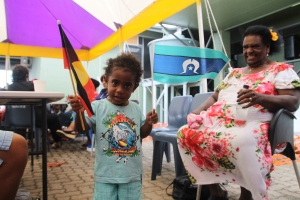 There were passionate speeches, dancing and feasting on kupmurrie wild pig, crayfish, prawns, sop sop and all the other amazing array of island food.

In comparison, a few days later Australia’s Governor General Quinton Bryce arrived up at the Strait, to grace us common folk with her ‘excellency-ness’ (at the expense of tax payers).

Now its not like the GG didn’t get a a genuine, warm welcome, she did, but…

Let me put it this way, the canapes before lunch were spring rolls and deep-fried dim sims (Ok there was also smattering of California rolls and some curry puffs too). 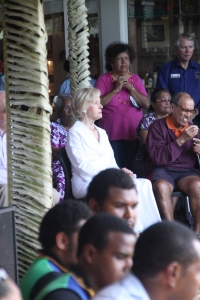 And the Kaurareg Elder who gave the ‘Welcome to Country’ did manage to still stick a knife in,

“We were driven from this land by gunpoint, but our connection to this land is through our blood and our culture survives through song lines and dance. Since then we have been put in the too hard basket.

“From human being to another, I appeal to you to help our struggle for equality as it still seems to fall on deaf ears.

“Due to the short notice of your arrival I could not organise the Kaurareg Elders to be present, nor did I dress up for this occasion as I thought it important for you to accept me the way I am,” he said.

After the speeches and dimmy canapes, GG ended up up at the army barracks for a late lunch with Defense and emergency services.

The Australian Defense force laid on a lavish lunch of corned beef and pickle sangers on a platter with a centerpiece to die for.

YES That’s an orange speared with toothpicks of cocktail onions and artificial cherries. A far cry from Hostel banquet of crayfish and kupmurries roasted wild pig…

Since becoming the editor of a regional newspaper in a remote location, many hundreds of kilometres away from the metropolitan, I have  found myself oddly at the centre of a hub of activity.

It’s very different to my time in the wilderness of freelance journalism in a city.

Previous to this job, I conducted most of interviews via the phone or internet from my kitchen table, usually in nothing but my underwear, a bottom feeder, jostling for contracts from magazine editors and digging around for leads on juicy stories.

Now, as an editor of a paper, I am constantly hunting for the new front page story, its like a drug, nothing else matters, then as some as the front page to the page page is laid out for the printer, there’s just enough time for a post-coital cuppa joe and a ‘arhhh’ of self satisfaction… But then it starts again, the chase – the next front page.

I’m acutely aware of position of influence I have in this small community spread over an immense area on Australia’s only border with another country. People approach me to write stories far more than I need to look for them. I am even courted by ‘Big’ papers like the Australian and TV channels who want to pry on-the-ground info out of me…

I frequently have breakfast with a Parish Hall restoration committee, or the Rotary, have a coffee with the Police Inspector, talk with regional indigenous leaders on a first name basis and have candid phone calls with federal politicians. The Mayor leaves messages on my answering machine. A far cry from my previous Hunterseque past.

But just as importantly I need to attend with the local parents and friends evenings, weddings, funerals, birthdays and school sports carnivals.

They have a love-hate relationship with me, everyone has an agenda, no one wants to be crucified by the press and in a small community. I have to walk a tight rope of attending to all these often opposite viewpoints, so I don’t get crucified – literally. The more earnestly I champion one cause, I so often have to champion the opposition to it to avoid appearing biased one way or another – despite what my own political leanings maybe. It’s a far cry from the drones writing for two third’s of the country’s press owned by Murdoch. My boss gives me a pretty free reign on my content and I try to honour that by being impartial as possible.

But I do take delight in following certain protocol of this family owned newspaper group.

“Never use the word honourable in prefacing a politician’s name, they are many things but not honourable,” my boss often says.

He also says I don’t need to wear a suit when dealing with dignitaries, in fact one of my bosses makes a point to wear shorts and thongs for the poli’s but dresses up for the local Elders.

It’s good to see my boss has his priorities worked out, similar to many of the islanders…