scrumping
Stealing fruit, especially apples, from someone else’s trees. British. It’s considered less bad than, say, shoplifting, but adults still disapprove.
My Dad, from the Midlands of England used to get a kick out of scrumping as a boy, and continuing this tradition, albeit misplaced on a remote tropical island on the other side of the planet, I took my young two year old daughter Sass on her first raiding party. 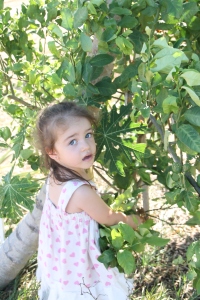 However, on Thursday Island (TI), there is not a single apple tree – there are however mangoes everywhere, to the point I become blase about them. They fill the gutters, ferment in piles and perfume the air with a rich sweet odor. We still felt the adrenaline race as we raided gardens for the unwanted fruit. Sass has developed ‘mango fever’, where the word ‘Mangos?’ is always said a s a request. 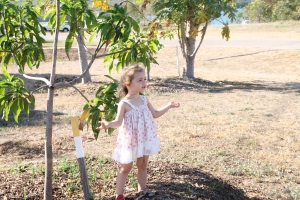 “Mangoes, where are you,” she said after inspecting a barren tree.

As well as mangoes there are coconuts – but they prove a little bit harder to grab, as well as a Tamarind tree, which I scrumped, but am unsure what do to with the bounty.

My wife Vivi squealed with excitement when she discover a Caju Tree in someone’s garden, a fruit she has not seen since leaving Brasil. We managed to liberate enough to make a fresh juice. 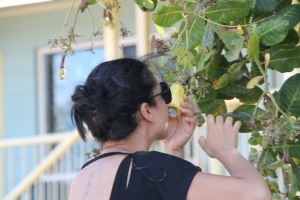 Also on the Island, the local TAFE Horticulture teacher, George Ernst, has established some 58 ‘Kai Kai’ (Ailan for food) Community gardens, which are grown in public space – for, well the public to enjoy. SO not technically ‘scrumping’, this increased our haul to include limes, pineapples, watermelon, chilli and lemongrass. 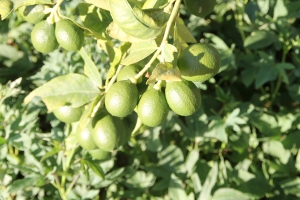 However in all their omnipotent wisdom, the co-ordinators of TAFE have decided to end George’s Horticulture course and effectively kill off the chance of survival of these Kai Kai Gardens, which he tended to in his free time. Apparently TAFE saw no intrinsic value in horticulture in the Torres Strait.  I sure can through… 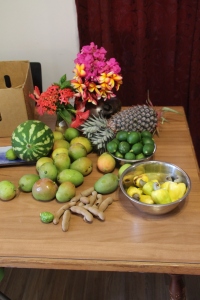 Sass enjoying the spoils of the raid.